Bureau of Energy Efficiency (BEE) recently made its Standards and Labeling (S&L) program mandatory for ceiling fans. This means that all the ceiling fans sold in India must carry energy efficiency star labels issued by the BEE and should have efficiency level of at least 1 star. Manufacturers have 6 months (till November 2022) to sell their existing unlabelled models. In case of non-compliance, BEE can ask the central government to prohibit manufacturers from selling their products and levy a fine of ₹ 10 lakh under the Energy Conservation Act, 2001 (and its amendments). BEE should be commended for this significant, albeit long overdue, decision. However, BEE will need to take some follow-through measures to ensure compliance with the program and achieving the significant benefits to the consumers and to the society. 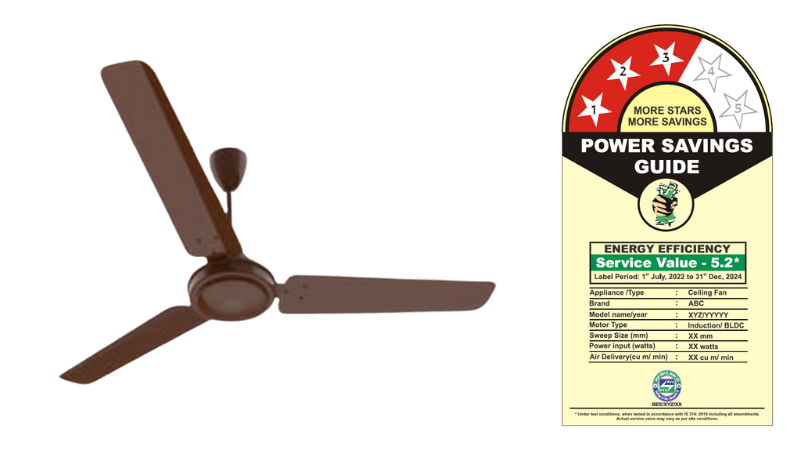 Why are ceiling fans important?

Ceiling fan is the most commonly used appliance in Indian houses, shops, and offices for relief from heat. Its use will only go up with increasing trend in the temperatures. They are estimated to account for about 40% of India’s residential electricity consumption in 2021 and continue to be a major contributor at 32% in 20301. Ceiling fans come in different sizes but the most commonly sold ceiling fans usually consume about 70-75 W at full speed. There are highly efficient models available in the market today which consume only about half as much. Cumulatively, with about 50 crore ceiling fans currently being used in Indian households, this could mean that India’s total residential electricity consumption can be reduced by as much as 20%, if all the stock is replaced by the most efficient fans today. This can potentially alleviate the periodic peak shortages that India has been facing recently. This can also avoid the social, environmental, and climate-change externalities associated with the electricity generation required to meet the inefficient demand. Finally, it will result in reduced electricity bills for consumers, which can be significant for lower income households. Although the benefits are evident, the energy efficiency improvement of ceiling fans in India has been slow.

How has ceiling fans’ efficiency improved in recent years?

In 2010, BEE introduced the S&L program in voluntary phase for ceiling fans. Under the program, BEE issues star ratings to appliances, with 1-star being the least energy efficient and 5-star being the most efficient category of models. After 2-3 years in voluntary phase, BEE is expected to make the program mandatory for the appliance. BEE is also expected to periodically revise the star-labels to make them more stringent as per the emerging technology trends. For example, BEE launched the program for room air-conditioners in 2006, made it mandatory in 2010 and has revised the labels 4 times till date. However, the first revision of labels for ceiling fans happened only in 2019 and the program has been made mandatory now after more than 12 years of launch. The program was initially proposed to be made mandatory in June 2020, but the decision was postponed as the manufacturers requested an extension due to hardships faced by the pandemic. The revision of the labels, however, was substantial with the older 5-star rating becoming the new 1-star rating and the older 4-star and below ratings becoming obsolete. Thus, the most inefficient fan available in the Indian market after the new standards are implemented would be of approximately 55 W 2. 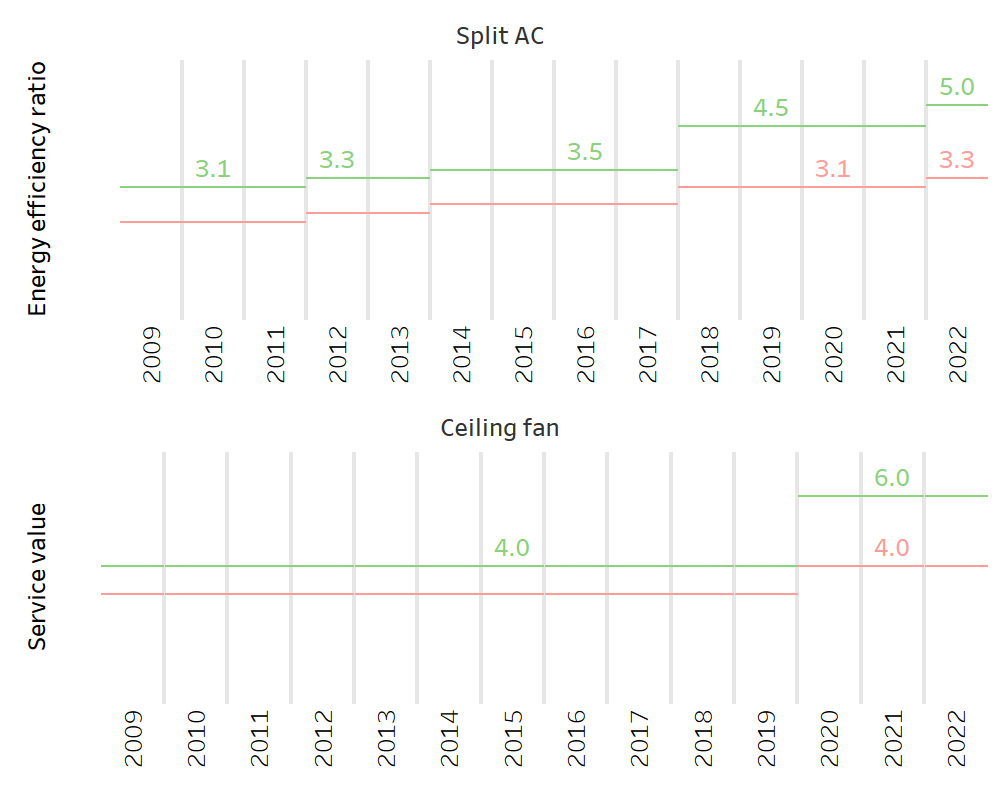 The laggard improvement in energy efficiency of ceiling fans can be attributed to many factors. First, the ceiling fan buyer is expected to be extremely sensitive to upfront cost. Although a highly efficient fan may work out cheaper over its life time due to reduced electricity bill, it costs more upfront. Hence the demand for star labelled fans remained low. Second, the ceiling fan industry is a mix of 7-8 large organized manufacturers which account for about 70% of the market and a number of small manufacturers which account for the rest. There was a fear that a mandatory S&L program would put the burden of compliance only on the large, organised players thereby increasing the cost of their products. Smaller manufacturers may skirt the regulations as BEE has limited wherewithal to actively monitor all the manufacturers for compliance. This would in turn lead to increase in market share of smaller manufacturers due to price differential.

In order to overcome these barriers, BEE announced a Super-efficient equipment program (SEEP) in 2012 to give time bound sales-linked financial incentives to manufacturers to cover the incremental cost of producing super-efficient ceiling fans (those consuming less than 35 W). This was similar to the recently launched Production Linked Incentive scheme (PLI), but focusing on energy efficiency instead of domestic production. There were substantial discussions with manufacturers and other stake-holders to bring them on-board and BEE even issued a request for proposal (RFP) with funding support from the World Bank. Unfortunately, the program was never actually launched. But thanks to the consultation process during the development of program, most of the manufacturers developed their models of super-efficient fans. Some start-up companies3,4 focused only on super-efficient fans and developed a niche market for themselves. Gradually, the demand for energy efficient ceiling fans has been building up. It was due to this development that BEE was able to substantially tighten the standards in 2019. But the manufacturers’ response to the S&L program has been tepid. Till recently, star labelled models accounted for only about 10% of all the models sold in the market. This is about to change with BEE making the S&L program mandatory for ceiling fans i.e. 100% of all the models sold in market should be star-labeled. The new 1-star ceiling fan will consume about 30% less than the market average today and the new 5-star model will consume about 50% less. This can result in significant savings of energy. However, the transition will not be automatic. BEE will need to take some follow-through measures.

S&L program is one of BEE’s flagship program and has been instrumental in improving the energy efficiency of appliances and equipment in India. There is still a substantial scope of improvement to make the program more effective. We discuss three broad recommendations, particularly in the context of the transition to the mandatory phase for ceiling fans. First, BEE needs to increase the consumer awareness about the S&L program for ceiling fans. One recent pan-India survey5 found that only about 25% of the households were aware about the S&L program with the number being 38% for urban households and 19% for rural households. Another survey6 found that awareness levels increase with income levels. Furthermore, the awareness is high for appliances like air-conditioners and refrigerators and low for appliances like ceiling fans and televisions. Hence, BEE needs to undertake large scale awareness campaign on the benefits of energy efficient fans across several media platforms with a particular focus on rural areas and medium and low income households. This is particularly important for the ceiling fans as they are bought by households of all income categories. BEE should also require all the e-commerce platforms to prominently and consistently display the star-labels for all the mandatory appliances including ceiling fans.

Second, BEE should substantially increase its monitoring, verification, and enforcement (MV&E) activities for ceiling fans. This should include periodic market surveillance across the country to identify cases of non-compliance where ceiling fans are being sold without a star-label, or with incorrect design and placement of the label. BEE should also increase the check-testing of ceiling fans where the models are picked from the market and tested in independent certified laboratories to check whether the performance of the fans is as per the star-label requirements. A recent (2020) report 7 from Comptroller and Auditor General (CAG) revealed that no market surveillance or check testing has been done for ceiling fans in the 10 years of voluntary phase of program. Additionally, BEE can mandate a QR code on the label for ceiling fan similar to the one that will be started for refrigerators from next year. The dynamic QR code will enable end to end tracking of the product and enable instant validation of the star-label by the consumer. Finally, consumers should be encouraged to report any non-complying product either through social media or through official platform on BEE’s website. A strong MV&E process is very important particularly due to the presence of large number of small and unorganized sector players in ceiling fan industry.

Third, BEE should consider launching its Super-Efficient Equipment Program (SEEP) to incentivise 5-star or more efficient ceiling fans. Usually, it has been observed that when BEE tightens the standards for any appliance, the market initially moves towards lower rated models. This means that manufacturers continue selling the same models but with a new downgraded label as per the new specifications issued by the BEE. Hence the share of lower rated models in total sales increases. This can happen to ceiling fans too. As per the data on BEE’s website, about 60% of the ceiling fan models registered as of June 2022 are 1-star models, while 25% are 5-star products. A SEEP like program can help in transforming the market towards higher energy efficient variants. BEE can also explore other mechanisms such as proposing a lower GST slab for 5-star ceiling fans. Ceiling fans fall under the GST slab of 18%. Indian Fan Manufacturers’ Association has been requesting for lowering down the tax to 12%. Instead, only 5-star fans can be placed under the 12% or 5% tariff slab to promote its uptake. This is similar to electric vehicles being taxed at 5% GST as compared to 28% for Internal Combustion vehicles. Such an exercise would require working closely with the Ministry of Finance.

BEE has taken a very important decision of making the S&L program mandatory for ceiling fans. This has the potential of transforming the ceiling fan industry and resulting in substantial energy savings. These savings can reduce consumer bills and alleviate India’s electricity shortage problem in summers in addition to multiple societal benefits. However, BEE will need to take follow-through measures to ensure a strict compliance with the program and realization of the benefits. These measures would include conducting nation-wide awareness campaigns, increasing monitoring, verification, and enforcement, and introducing incentive programs like sales based incentives and tax rebates for higher efficiency models. BEE should also closely interact with the manufacturers in the next six months to make sure the transition is on track and identify and address any issues. In absence of these follow-through measures, the ceiling fan market may either not comply with the mandatory regime in entirety or may remain stagnant in low-rated energy inefficient models. In either case it will be a wasted opportunity.

[1] PIER: Modelling the Indian energy system through the 2020s https://energy.prayaspune.org/our-work/research-report/pier-modelling-the-indian-energy-system-through-the-2020s