MW scale solar for farmers under KUSUM in Rajasthan: A welcome start but more to be done

1. Component A under KUSUM

Rajasthan has seen significant progress in the implementation of Component A of the central government Pradhan Mantri Kisan Urja Suraksha evam Utthaan Mahabhiyan (PM-KUSUM) Scheme launched by the Ministry of New and Renewable Energy (MNRE). Component A of the scheme focuses on the installation of decentralised, grid connected, MW (megawatt) scale solar plants at the sub-station level to provide day-time supply to farmers in that location.1 With 12 lakh subsidised agricultural consumers, responsible for 40% of the electricity sales in Rajasthan, efforts to utilise solar power to meet agricultural demand are required. The scheme would substantially benefit a solar resource-rich state like Rajasthan, where about half the agricultural feeders have been separated.

Each MW scale plant is to be owned and managed by farmer groups or developers who are to sign a 25 year power purchase agreements (PPAs) with the DISCOMs. With low cost, fixed price power procurement and savings in avoided transmission and distribution loss, the DISCOMs would see a reduction in cost of supply. As the state government has an annual agricultural subsidy bill of more than Rs. 10,000 crores, such costs savings are essential.

Unlike the other two components under KUSUM which focus on installation of solar pumps, component A does not require any upfront capital subsidy and farmers do not have to ensure operation and maintenance of the plant.

To implement Component A of the scheme, the utility would have to identify and notify sub-stations where MW scale projects can be commissioned. Following this, the utility or its appointed agency should invite bids from interested parties to set up the plant and sign a 25 year PPA. The generated energy is to be purchased at a pre-fixed levelised tariff determined by the Commission. In case there are multiple interested parties at a sub-station, bidding is to be conducted with the pre-fixed tariff as the ceiling tariff.

2. Progress under Component A in Rajasthan

To operationalise Component A, the following steps have been undertaken in Rajasthan:

The Jaipur, Jodhpur and Ajmer DISCOMs have published details of the sub-stations eligible for installation of such projects. The details published include the location-wise distribution transformer (DT) capacity, agricultural load at the location along with solar capacity to be installed at each sub-station. The DISCOMs have estimated that it is possible to install 6,028 MW of capacity around existing substations with an average plant capacity of 1 MW in each location. In addition, they have also identified additional viable locations for 196 MW.

2.2 Call for bids from developers

On 9th September 2019, the Rajasthan Renewable Energy Corporation Limited (RRECL) issued a Request for Selection for developers for setting up decentralised Solar PV plants with the size of 0.5 to 2 MW each, totalling to 113.5 MW. Pre-bid meeting for this RfP with interested developers was conducted on 19th September 2019. The status of this call for bids is not clear.

The draft PPA and model agreement for lease of land have been uploaded on the RRECL website. Subsequently, the DISCOMs reported that about 4,802 applicants have registered to set up plants offering a total capacity of 6,085 MW. It also seems that bidding and appointment process is underway for the identified sub-stations as interested developers for each location were supposed to submit their application along with the earnest money deposit by the 15th of March 2020.

2.3 Registration from land owners set up plant or lease land for projects

RRECL also invited land owners to register their land to either set up the project by themselves or lease the land for installation of the plant. Details of all registrations are published on the RRECL website which includes the size of the land and the distance of the land from the sub-station. A total of 7,445 parties have registered to offer their land on lease.

2.4 Fixation of pre-fixed levelised tariff for purchase of power

On 11th February 2020, the Rajasthan Electricity Regulatory Commission’s order approved a rate of Rs.3.14 /kWh as the pre-fixed levelised tariff and the ceiling tariff for competitive bidding. This rate was fixed after public consultation on the draft order published by the Commission in September 2019.

The steps taken for implementation of Component A are commendable and have also been adopted by Haryana DISCOMs. These steps include similar process and formats related to:

3. More to be done: Need to re-assess size of plants to suit average pump size in state

The Rajasthan Solar Policy, 2019 specifies that the state commits to the promotion of decentralised solar power projects near sub-stations for sale of power to DISCOMs up to 3 MW. However, the draft RERC order echoes the prescription in the central sector KUSUM scheme document that the projects under component A would be up to 2 MW. In line with this, the solar plants planned for installation as per DISCOM reports are about 1 to 2 MW in each location.

Yet, the data submitted by the DISCOMs while publishing the list of eligible sub-stations shows that the solar capacity in each location would meet only about 45% of the agricultural demand in that location. This is because Rajasthan farmers have pump sets with an average connected load of about 10 kW per farmer which is much higher than the national average of 5 kW per farmer as reported by the Central Electricity Authority (CEA).2

The DISCOM-wise variation in total agricultural connected load for the identified sub-stations and total solar capacity to be installed is compared in Figure 1. Figure 1 also shows the average connected load per consumer for each DISCOM. 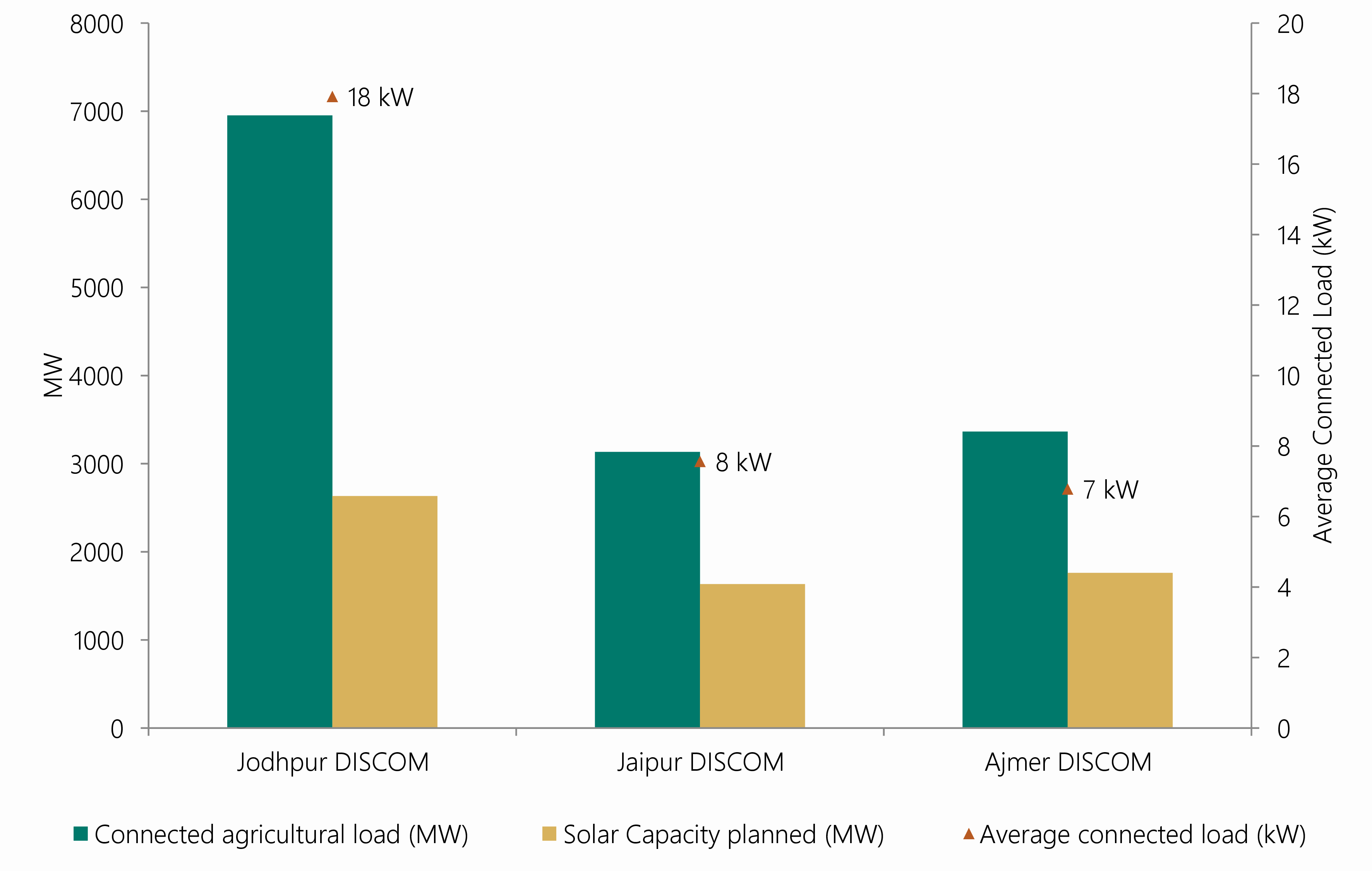 Source: Prayas (Energy Group) compilation from true-up petitions and submissions on eligible substations by the DISCOMs

To provide all farmers with day-time supply and to realise reduction in subsidy and procurement costs, the plants sizing should increase by at least 50% in all locations. To start with, DISCOMs can ensure land assessment for larger plants and ensure developers are interested in plants with sizes of 4-5 MW. The MNRE has already finalised facilitating guidelines for projects over 2 MW. Such guidelines should be adopted by Rajasthan DISCOMs.

1. The use of Feeder level, MW scale, solar plants to cater to agricultural demand has been pioneered in Maharashtra under the Chief Minister’s Solar Agriculture Feeder Policy (Mukhyamantri Saur Krushi Vahini Yojana), launched in 2017. As of January 2020, more than 3,500 MW is under various stages of procurement under the scheme. Details of the scheme are available here.

2. This is based on data for FY17 reported in the Annual General Review, published by CEA.