In October, 2019, the Solar Energy Corporation of India (SECI) put out a tender for ‘Selection of RE Power Developer for “Round-the-Clock” Supply of 400 MW RE Power to NDMC, New Delhi, and Dadra & Nagar Haveli under Tariff-based Competitive Bidding (RTC-I)’. While four bidders passed the technical qualification stage and submitted financial bids, three of them were selected for the e-reverse auction held on 8th May, 2020. ReNew Solar Power Private Limited won the entire capacity on offer of 400 MW with a winning first year bid of Rs 2.90/kWh.

While the generation price of new Renewable Energy (RE) projects is certainly very low and attractive, the issue of reliable grid integration of this variable power, esp. with increasing and large shares of RE is certainly still an open question. Hence, when the auction threw up such an attractive price1 for RTC power based only on renewables, the sector took notice as this could be a potential game changer. This is all the more important since the average RTC price in IEX for 2018 was comparably higher at Rs 3.9/kWh. This article critically examines this tender and its implications for future renewable energy (RE) procurement.

Subsequent to issuing the Request for Selection (RFS) document issued in October, 2019, clarifications were issued on 29th January, 2020. These were followed by five amendments to the RFS issued during January-March, 2020. The broad highlights of the RFS are as follows.

In essence, this is a ‘hybrid’ RE RFS which mandates a very high annual and monthly CUFs, with very stiff non-compliance penalties. Further the use of the nomenclature, ‘RTC’ is not wholly appropriate since the commonly understood meaning suggests a round the clock supply for all times, which this RFS clearly does not mandate given the minimum annual CUF requirement of 80% and not 100%. Thus while the contracted capacity PLFs are comparable to thermal power, it does not offer dispatchability like thermal power. Finally, given that multiple generation locations are allowed, this may not be hybrid in the true sense of the word, wherein typically wind and solar generation capacities are located close by, thereby saving on land, transmission, permitting and transaction costs, while achieving better utilisation of transmission assets, though developer is free to co-locate wind and solar to take such advantages.

The detailed results of the auction are tabulated below. While three bidders qualified for the reverse auction with a financial bid of Rs 3.59-4.05/kWh for the first year, the final reverse auction reduced this significantly with the winning margin for Renew Solar Power being a mere 1 paisa/kWh. Since the Rs 2.9/kWh (first year tariff) has a 3% escalation for 15 years, this works out to a levelised tariff of ~ Rs 3.6/kWh over the 25 year PPA period.

Table 1: Results for the RE RTC tender

Given the very high minimum CUF requirements, this appears to be quite an attractive tariff for the procurers. Further, this compares well with another hybrid RE project which has been approved by Maharashtra Electricity Regulatory Commission, MERC, in which Adani Electricity Mumbai Limited is contracting a 700 MW hybrid RE project with a CUF of 50% at a fixed tariff of Rs 3.24/kWh for 25 years. This is being developed by Rosepetal Solar Energy Private Limited (a subsidiary of Adani Green Energy) and is expected to have an energy curtailment of 13%. It is likely to be fulfilled by a combination of 650 MW of wind and 650 MW of solar capacity.

As already noted in the introductory section, a levelised tariff of Rs 3.6/kWh for RE based RTC power is extremely attractive and is perceived as a potential game changer for the sector with regard to reliable grid integration of variable RE power. This brings up questions such as, a) Could such projects be a replacement for base-load thermal power plants? b) Are such high CUF projects possible with wind and solar power (given their seasonal and diurnal characteristics) but without energy storage? c) what market prices would be needed to sell the excess power to make the project viable? d) can such capacity be procured at any scale?

To try and answer such questions and gain further insight into this auction and the implications of such types of tender on the procurers, we performed an analysis using wind and solar generation profiles for Maharashtra. For this analysis, we assumed up-front that the project would not use energy storage, but only a combination of wind and solar power. We used 15-minute resolution generation data for a sample year for wind (CUF of 38%)2 and a broadly representative 15-minute single-axis tracking solar3 (with a CUF of 26.2%) generation data. We then tried out various combinations of wind and solar capacity such that the auction requirements of a minimum annual CUF of 80% and a monthly minimum of 70% would be achieved for a contract capacity of 400 MW. We find that a one combination of 1500 MW of wind power and 850 MW of solar power meets the above requirements. Obviously, different combinations of wind and solar capacity at locations other than Maharashtra, with higher/lower individual annual CUFs, different generation profiles especially with newer technology (e.g. even taller and larger wind turbines) would be possible. Combining energy storage with RE generation is certainly a possibility and would significantly reduce the required installed project capacities but this has not been analysed here.

Figure 1: Monthly CUFs for the contracted capacity of 400 MW 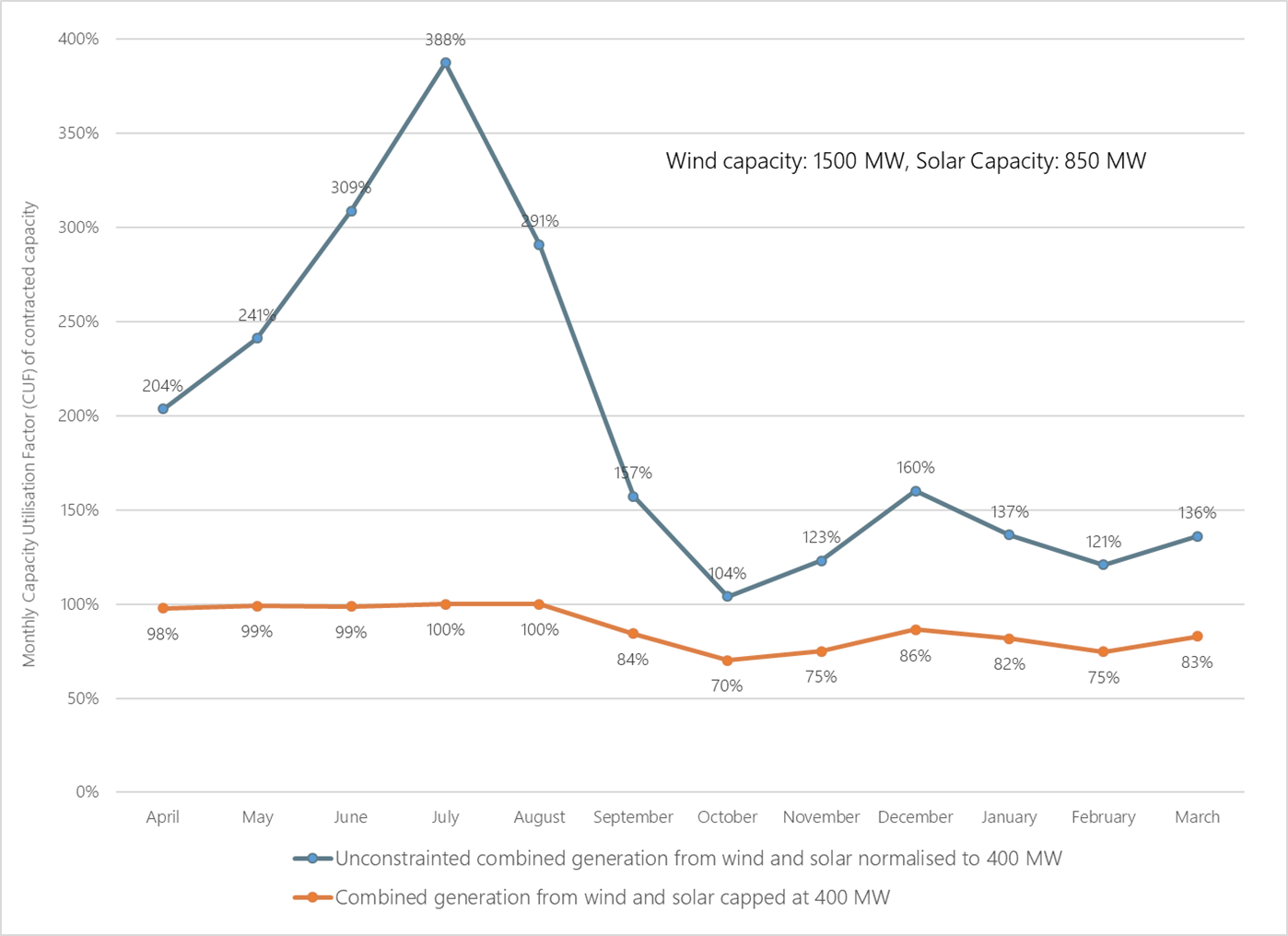 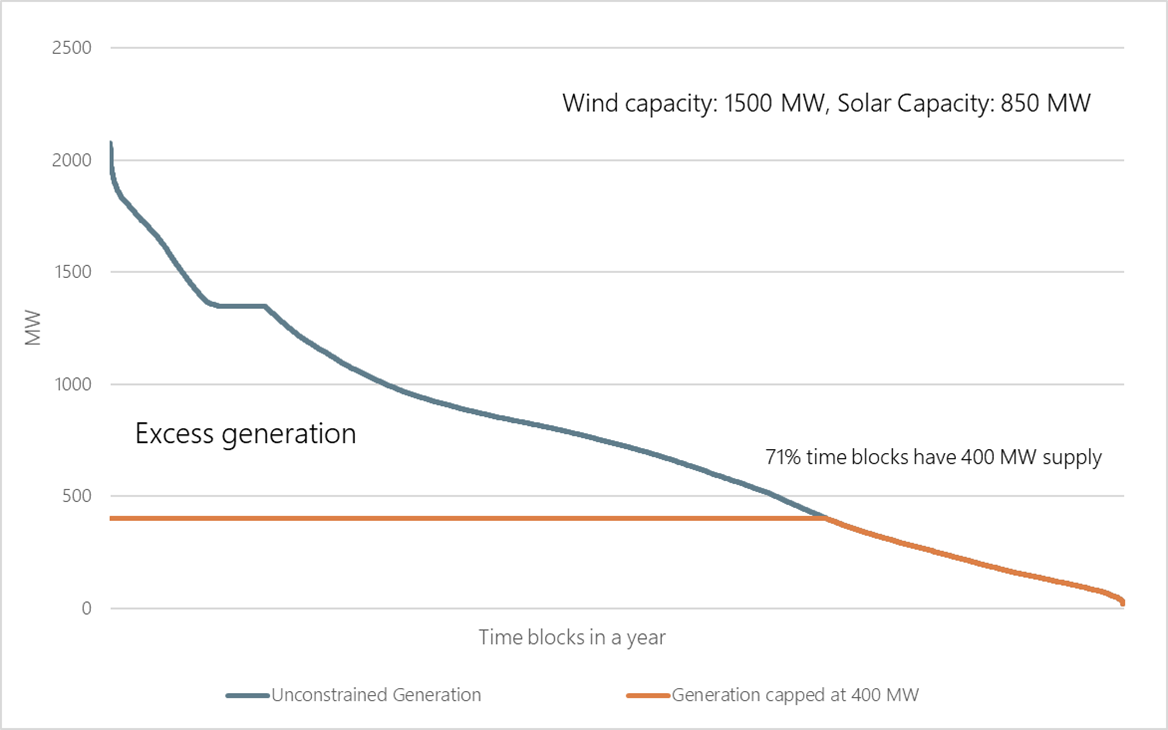 As seen from figure 1, the monthly CUF of the generation profile (capped at 400 MW) does not fall below 70% in any month. The high monthly CUFs of the unconstrained generation (blue line), especially in the monsoon months depict the excess generation availability. Further, the project achieves an overall annual CUF of 88%.

56% is a significantly high value and hence unless ways are found to monetise it, the project (with installed capacity 5-6 times higher than contracted capacity) will not be viable. Let us assume that if all the unconstrained generation from the entire project capacity is sold at a tariff of Rs 2.6/kWh (comparable to the present discovered price for wind and solar power), the project would be financially sustainable. But we know from the winning bid, that the RTC power (area under the orange line) would be sold at a levelised tariff of Rs 3.6/kWh. Hence all the excess generation, on an average needs to garner a price of at least Rs 1.81/kWh to make the project financially viable.4 As we have seen earlier, different combinations of wind and solar with their unique generation profiles may result in different levels of excess generation. The table below shows what price would be needed if the excess generation is lower at 45% or 35%.

The entire question now boils down to various ways of effectively monetising all (if not most) of this excess generation to make the project viable. Given that the value and hence the price of electricity varies within the day (morning & evening peaks and off-peak) and across the months given the seasonality of demand and generation, it is important to understand the distribution of the excess energy across these dimensions. The heat map in figure 3 below shows this distribution. It shows the month-wise and Time of Day (ToD) slot wise excess generation as a percentage of total annual excess generation as well as the number of time blocks where excess occurred. The time slots within the day are divided as 0:00-6:00; 6:00-9:00 (morning peak), 9:00-17:00, 17:00-22:00 (evening peak) and finally 22:00-24:00. This gives us a grid of 12 (months) by 5 (time slots within a day). As expected most of the excess generation is during the solar hours throughout the year and this is further concentrated in the windy months of May-Sep. However, it is important to note that upto 30% of the excess generation takes place during the morning and evening peak hours, where its value will be much higher than other time slots. 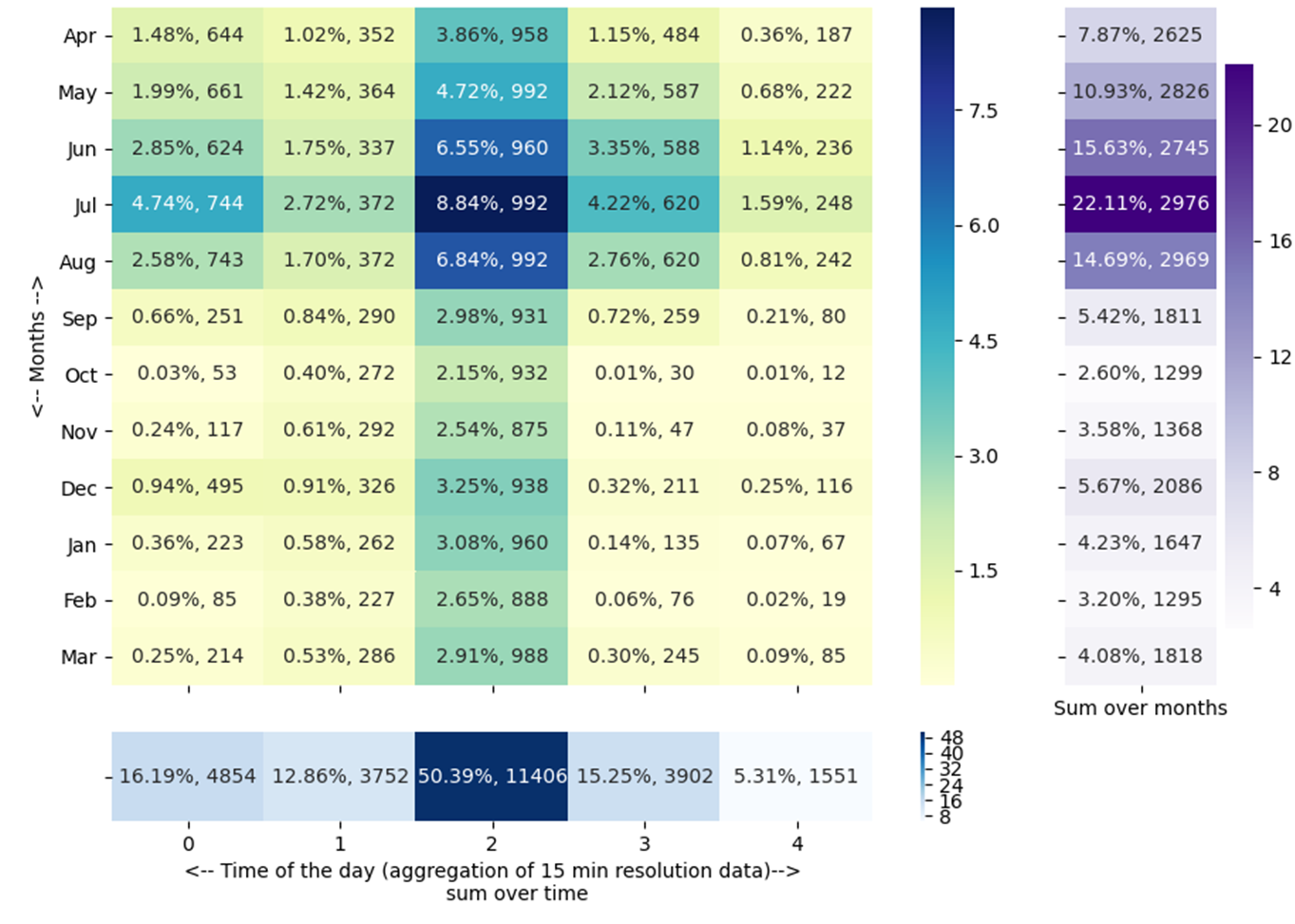 Next, based on this understanding of the monthly and time-wise distribution of the excess generation, we discuss possible sources of revenue / sales avenues for this energy.

2. The actual annual wind generation data was linearly scaled up so that it would be broadly representative of a new wind project with an equivalent CUF of 38%.

4. The analysis is done assuming a levelised price of Rs 3.6/kWh, while in reality the first year tariff is Rs 2.9/kWh.