Regulatory treatment of time and cost-overruns: Units 3 to 6 of Chhabra Thermal Power Station

In January 2020, the Rajasthan Electricity Regulatory Commission (RERC) approved1 the provisional capital cost and tariff for the recently commissioned Unit 5 and Unit 6 of Chhabra Thermal Power Station (TPS). Unit 5 was delayed by 18 months and Unit 6 by 27 months as compared to the scheduled Commercial Operation Date (CoD) for the project. Such delays result in cost overruns which increase the project’s fixed cost. Units 3 and 4 of Chhabra TPS whose final capital costs were approved by the Commission less than a year ago in March 20192 also faced similar delays.

As the project execution of Units 3&4 and Units 5&6 were planned together, RERC decided that the final approval of costs would take place once both units are commissioned and in the interim, provisional approvals will be provided to enable timely recovery of costs.

Rajasthan Rajya Vidyut Utpadan Nigam Limited (RUVNL), the state owned generating company currently owns and operates the Chhabra TPS in Baran district. Units 3 to 6 together account for about 1,820 MW, which is 21% of RUVNL’s total capacity. Table 1 provides an overview of the projects.

Notes: The cost estimates for Unit 5 and 6 are provisional based on RUVNLs claims.
Source: Prayas (Energy Group) compilation from various RERC orders.

These units took 7 to 10 years to complete after board approval as compared to the average of 5 to 6 years. The table also lists the companies to which the Boiler Turbine Generator (BTG) contract and the Balance of Plant (BoP) contracts were awarded. For delays attributable to the contractors, the generator can claim liquidated damages (LD) as per specifications of the contract, part of which is passed onto consumers in a cost-plus project. Cost impacts due to time overruns are typically compensated by revising the interest during construction (IDC) which is also to be recovered from consumers. The IDC claimed by RUVNL is about 4.7 times higher for Units 3&4 and 1.6 times more for Units 5&6 than the IDC in the original cost estimate.

2. Reasons for delays and regulatory treatment of cost impact for Units 3 and 4

While scrutinizing the capital costs for Units 3&4, RERC, in its order decided to:

This approach is in line with the framework specified by the Appellate Tribunal for Electricity (APTEL) in its judgment in Appeal No. 72 of 2010. In the context of this framework, the reasons for delay in execution of the BTG and BoP works for Unit 3 and 4 detailed by RVUNL as well as the Commission observations for the same are summarised in Table 2.

Table 2: Reasons for delay for Units 3, 4 and Commissions treatment

RERC’s assessment was based on detailed data submitted by RVUNL (in compliance with the Commission’s directions) on activity-wise schedule and actual completion of works, package-wise reasons for delay, correspondence with contractors, exact delays due to rainfall and historical regional rainfall data. These submissions are not available in the public domain. In its order, the Commission did not detail the insights from evidence presented by RUVNL.

Figure 1: Capital cost and IDC approved by RERC for Units 3 and 4 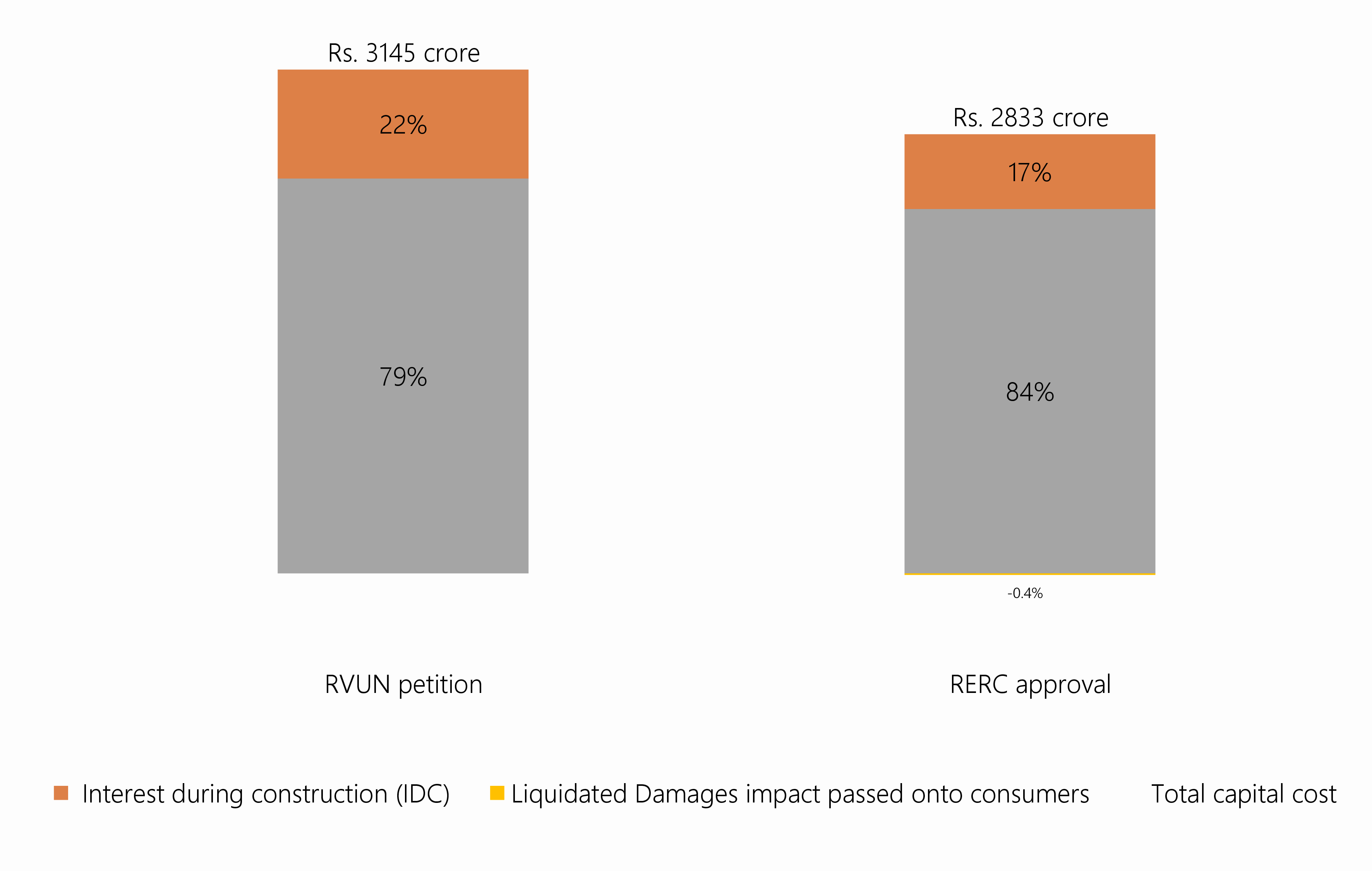 It is difficult to ascertain if such a treatment has resulted in RUVNL being held adequately accountable for delays. This is because some factors such as election schedules and successive years of heavy rainfall could have been anticipated and planned better by RUVNL. It is perhaps likely that a disaggregated assessment of costs and a detailed analysis of schedule of events by the Commission could have further reduced the cost impact on consumers.

3. Capital cost approval for Unit 5 and 6

In case of the provisional approval of capital cost for Unit 5 and Unit 6, RUVNL claimed that the delays were due to uncontrollable factors including issues with land acquisition (3 months), delays in obtaining environmental clearance (EC) (22 months) and equipment failure (11 months).

It is interesting to note that the delay in obtaining EC was due to issues with the coal source. RUVNL planned to get coal from Parsa East and Kante Basan coal block in Chhattisgarh which was allotted to the generator in 2007. The allotted mines were to cater to 2,460 MW of Suratgarh and Chhabra TPS, both owned by RUVNL. However as per the mining plan, the mines could only cater to 1,980 MW. Due to lack of clarity for 660 MW, the EC for Chhabra Unit 6 was delayed substantially. Subsequently, the clearance was given after the mining plan capacity was revised by 5 MTPA and RUVNL proposed the diversion of coal from Kota TPS (to meet demand in case of delays in obtaining EC for the enhanced mining capacity).5 Such steps could have been taken earlier by RUVNL to prevent the delays.

The Commission stated that it would revise IDC only after detailed costs are submitted for final cost approval. In the interim, no additional IDC due to delays were approved and thus Rs. 1,247 crores was provisionally disallowed by RERC.

Given that Unit 6 has also been commissioned, it is imperative that the final cost approval takes place soon rather than after a significant delay like in the case of Unit 3 and 4.

It is hoped that Commission conducts a detailed assessment of reasons for time and cost overruns, keeping in mind steps (or lack thereof) taken by RUVNL to prevent delays while determining the final capital cost for these units.

5. The EC for the enhanced mining capacity was eventually given in July 2019.