With rising costs and limited revenue recovery, electricity distribution companies (DISCOMs) in Rajasthan resorted to short-term borrowing to finance their day to day operational expenses. While such short-term/working capital borrowing is necessary for smooth operations, the interest liabilities incurred can be significant. A build-up of such liabilities can substantially contribute to the financial crisis of the DISCOMs. In fact, 65% of the outstanding liabilities taken over by the Rajasthan government under the Ujjwala DISCOM Assurance Yojana (UDAY) are due to these short-term loans.

To address the issue of significant outstanding liabilities of DISCOMS, the Union Government launched two schemes in the past decade, both of which focused on the takeover of liabilities with the state government issuing bonds. The first scheme is the Financial Restructuring Plan (FRP), initiated in 2012 and the second, the currently applicable UDAY scheme, introduced in November, 2015. Rajasthan DISCOMs are signatories to both these schemes.

Recognising the trend of increasing short-term liabilities, one of the conditions under the FRP was to ensure DISCOMs discontinue incurring short-term loans from banks. However, by FY16, years after the launch of FRP, the Rajasthan DISCOMs had outstanding dues of about Rs. 52,000 crores due to such loans. UDAY also committed to curbing the extent of working capital borrowing to 25% of the annual aggregate revenue requirement (ARR).Despite the commitment, many DISCOMs in the country have incurred significant short-term debt since the launch of UDAY. In fact, the Maharashtra State Electricity Distribution Company Ltd (MSEDCL) faced cumulative short-term borrowings of Rs. 23,170 crores accounting for 30% of the ARR in FY19. However, even with the financial implications, there is hardly any information in the public domain on the nature and extent of short term borrowings in various states. Rajasthan DISCOMs, as a welcome practice, report details of working capital borrowing as part of the true-up and tariff determination processes before the Rajasthan Electricity Regulatory Commission (RERC).1  Analysis of the data submitted provides a better understanding of the trends in their short-term borrowing.

Figure 1 shows the working capital borrowing by the Rajasthan DISCOMs as a proportion of its ARR. 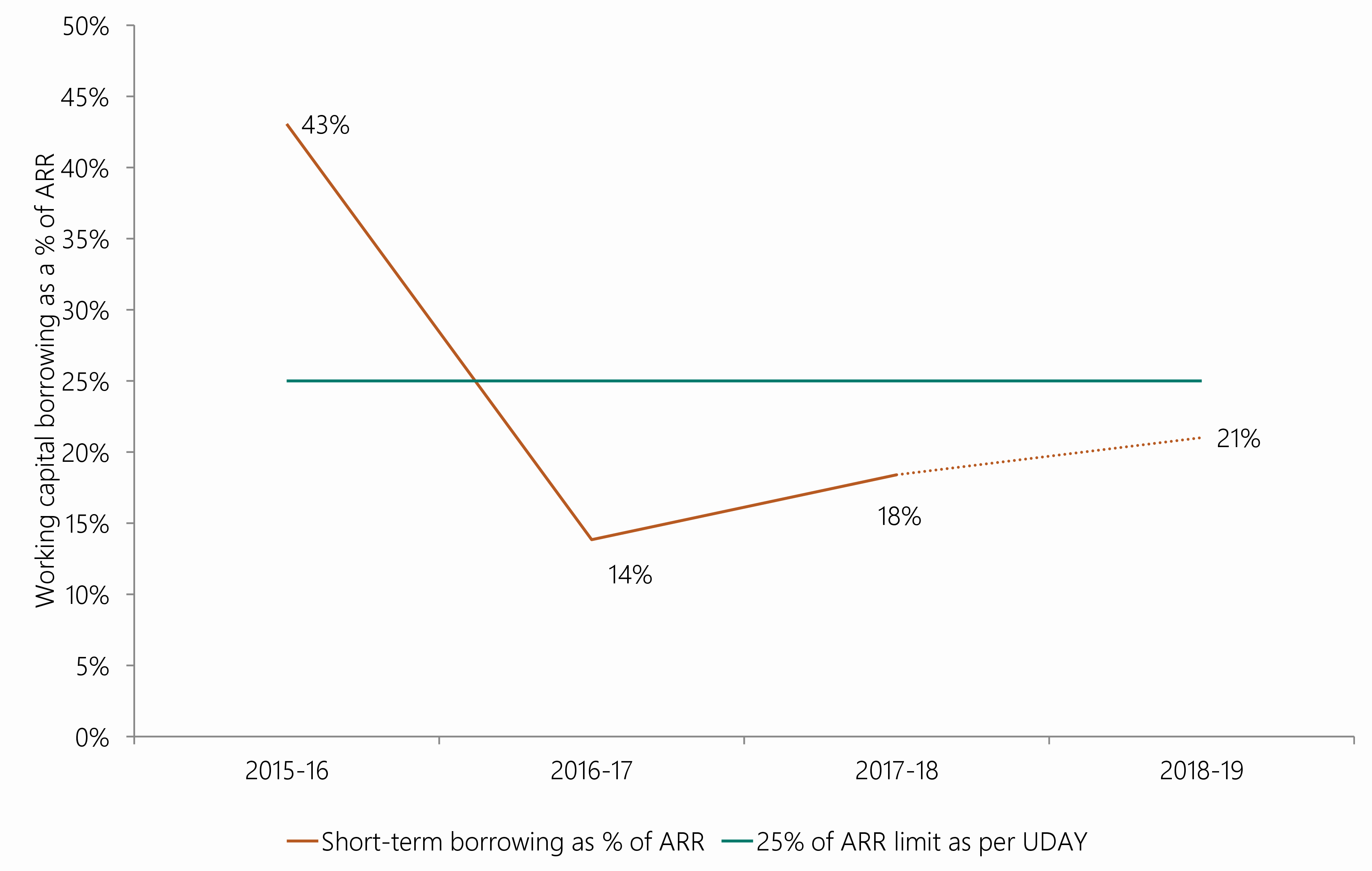 Note: Data for FY16 to FY18 is based on actual working capital loans outstanding at the end of the year. Dotted lines denote that numbers for FY19 are based on estimates.
Source: Prayas (Energy Group) compilation from true-up, tariff petitions

In FY16, working capital borrowings were as high as half the ARR. This fell to 14% in the subsequent year primarily due to the debt take over by the Rajasthan government. Since the take-over, the working capital borrowing has been increasing and is estimated to be 21% of ARR for the year FY19. With such a build-up it is likely that in FY20, the DISCOMs would have exceeded the borrowing limit specified under UDAY. This can only be verified once the DISCOMs file true-up petitions for the year.

The steep and consistent increase post-UDAY is mostly due to new short-term loans taken every year. As shown in Figure 2, the additional short-term borrowing every year ranged from Rs.3,000 to Rs.4,600 crores between FY16 and FY18. 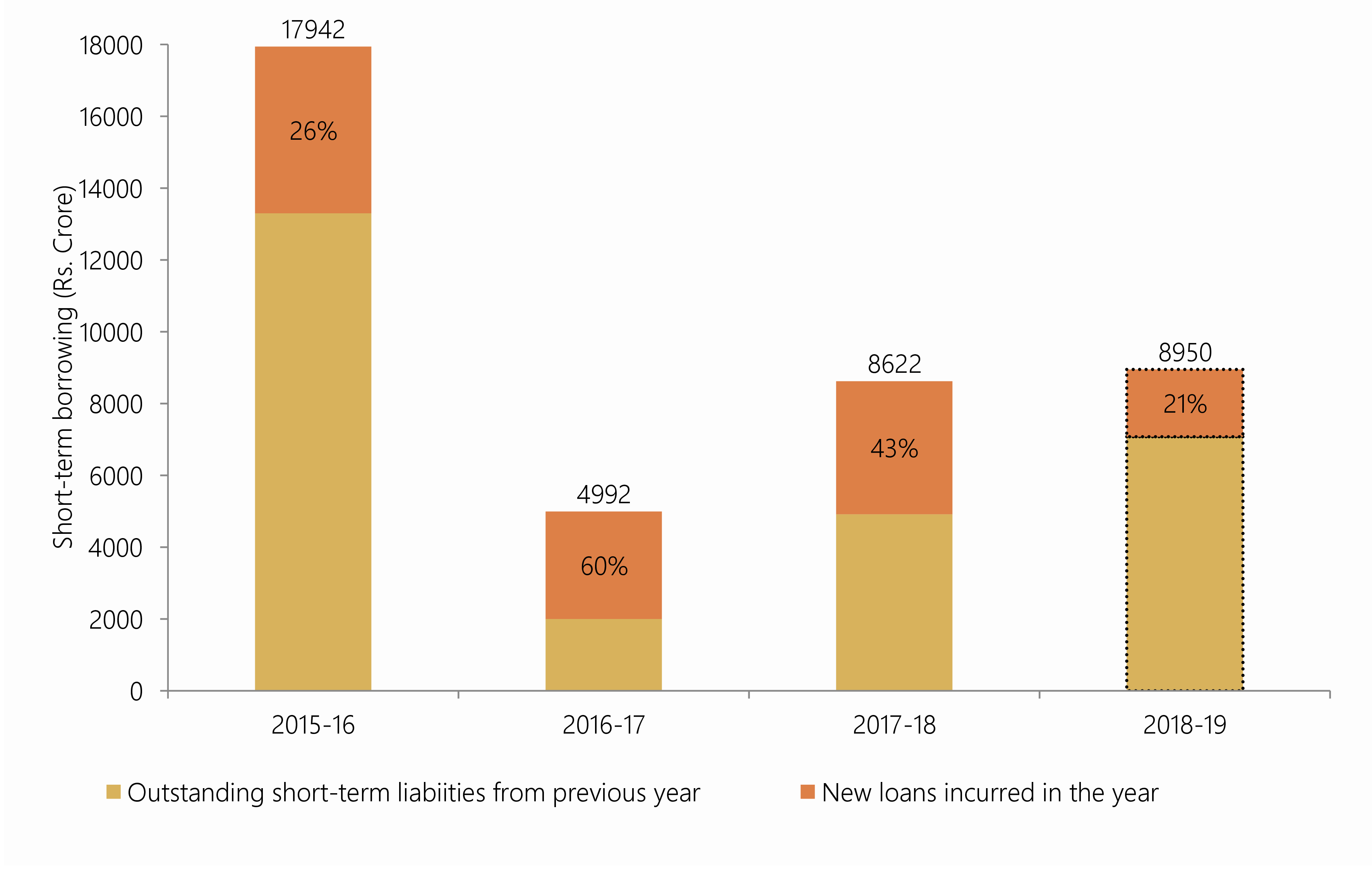 Note: Data for FY16 to FY18 is based on audited actuals. Dotted lines denote that numbers for FY19 are based on estimates.
Source: Prayas (Energy Group) compilation from true-up, tariff petitions submitted to the RERC

This accounted for 60% and 43% of the total cumulative outstanding borrowings in FY17 and FY18 respectively. The DISCOMs estimated lower additional working capital borrowings for FY19 but this will be revised when the audited accounts are published.

While new loans are substantial, the annual repayment of loans is typically not. In FY16 and FY17, significant repayments took place due to debt take-over under UDAY. However, in FY15, the repayment was Rs. 134 crores accounting for 0.3% of the outstanding loans that year and in FY18, only Rs. 44 crores (0.5% of outstanding working capital loans) were repaid. Without regular repayment, a significant build up interest liabilities is certain.2

As shown in Figure 3, about 74% of the outstanding debt incurred till FY15 was due to loans taken from various public sector banks. However, since UDAY, majority of the working capital borrowing is from the Power Finance Corporation (PFC) and the Rural Electrification Corporation (REC), which are public sector undertakings under the Ministry of Power. 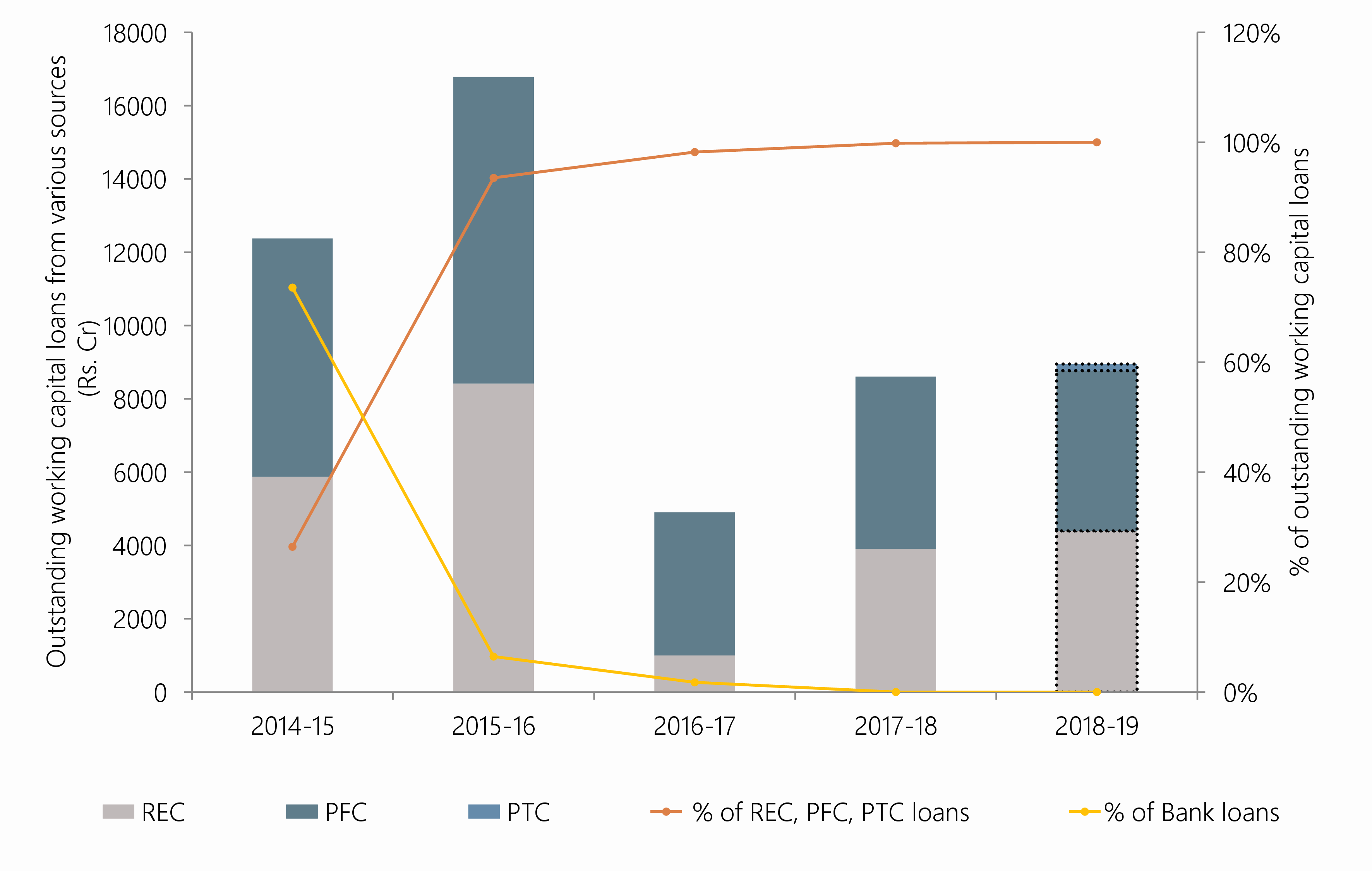 Note: Data for FY16 to FY18 is based on audited actuals. Dotted lines for FY19 denote that numbers are based on estimates.
Source: Prayas (Energy Group) compilation from true-up, tariff petitions submitted to the RERC

Figure 4 shows, all of the new short-term loans post- UDAY are from PFC, REC and to a limited extent Power Trading Corporation (PTC), another public sector company under the Ministry of Power. It imperative to understand if this trend is applicable to other states as well. 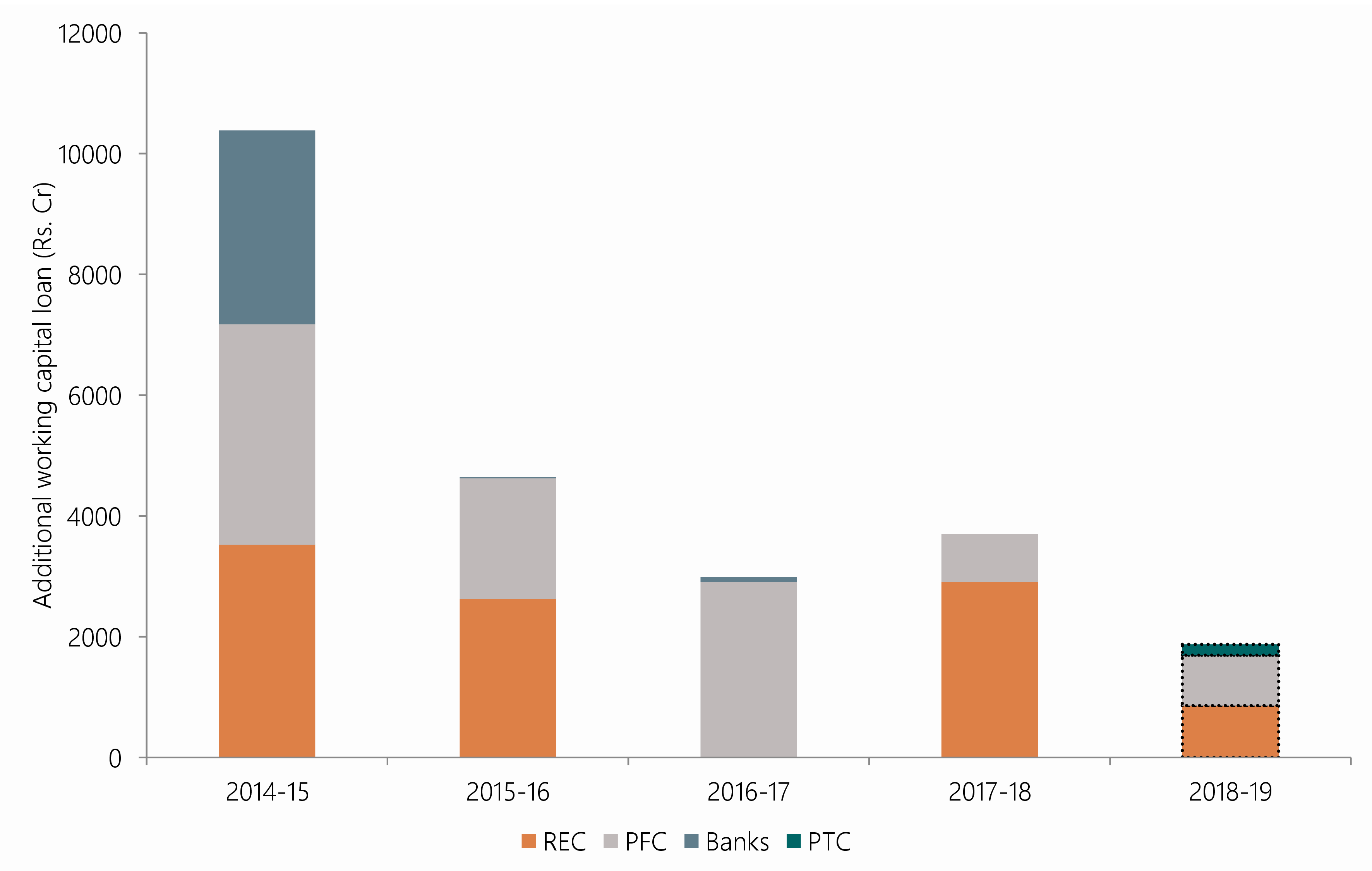 Note: Data for FY16 to FY18 is based on audited actuals. Dotted lines for FY19 denote that numbers are based on estimates.
Source: Prayas (Energy Group) compilation from true-up, tariff petitions submitted to the RERC

5. No bonds issued while DISCOMs seem to wait for another bailout

Under UDAY, in addition to the bonds issues to finance past losses, the Rajasthan DISCOMs committed to financing future losses by issuing bonds which are backed by state government guarantee rather than through short-term loans.3 However, Rajasthan DISCOM filings make it clear that no new bonds have been issued to finance losses post-UDAY. One could thus surmise that the impact of losses is being borne by the short-term loans.

The build-up of working capital loans is indicative of deep seated issues in the sector. With rising costs and limits to increasing tariff, cross subsidy and subsidy, the dependence on working capital loans will only increase in the future. With current trends, it is only a matter of time before another bailout is needed. Only this time, instead of banks, the recipients will be PFC and REC.

The State government in Rajasthan and other states should consider issue of bonds and other financial instruments to finance losses. Further, the Ministry of Power and SERCs should ensure tracking and reporting of working capital borrowings across states in a manner similar to the tracking of aggregate technical and commercial (AT&C) losses and revenue gaps. There is also a need for MoP to ensure independent and effective monitoring of lending by PFC and REC to prevent build-up of loans.

2. For example, assuming an annual interest rate of 12% for the new loans taken in FY17, the interest payments of these loans alone would contribute to 10% of the total outstanding working capital borrowing projected for FY19.

3. For more details, please read the Memorandums of Understanding signed by the Ajmer, Jodhpur and Jaipur DISCOMs under UDAY.