Lighting: LED all the way

Prayas (Energy Group) conducted a survey of 3000 households in semi-urban and rural areas of Uttar Pradesh and Maharashtra to understand their energy end-use patterns. This survey was conducted in February-March 2019. ECHO is a series of blog posts presenting the key findings of the survey. This post discusses households’ use of electricity for lighting.

Lighting is the most basic use of electricity in a house. In many low-income and newly electrified households it may be the major or the only use of electricity. Lighting also coincides with the evening peak time use of electricity. Several government/utility programmes in the past have targeted replacement of incandescent bulbs with highly efficient CFLs and LED bulbs. The most recent and also the most successful is the on-going Unnat Jyoti by Affordable LEDs for All (UJALA) programme. Under UJALA, LED bulbs are being made available at a discounted price to consumers by procuring bulbs in bulk quantity and selling them through contracted vendors. More than 350 million LED bulbs have been sold so far under the programme. About 1.4 billion bulbs and tubelights were manufactured in India in 2018. About 46% of these were LED lighting and 43% were incandescent bulbs with rest being CFLs and fluorescent tube-lights. LED lighting has seen a burgeoning demand while CFL sales have plummeted in recent years. Sales of incandescent bulbs are also dropping but at a much lower rate than that of CFLs.

We see a fairly high adoption of LED lighting in both Uttar Pradesh and Maharashtra (see Figure 1) in our survey. More than 80% of all the lighting devices used in the surveyed households from Uttar Pradesh are LED bulbs or tube-lights. This is observed across all the income categories. About 68% of the households use only LED bulbs for lighting. Most of the households responded that they are satisfied with the performance of LED lights and will continue using them. In Maharashtra, about 54% of all the lighting devices used in the surveyed households are LED lights with small variation across income categories. CFLs form the second most used lighting option (about 27-28%). One possible reason for the lower adoption of LED bulbs in Maharashtra households is that they shifted to CFLs first, partly due to the government’s previous programmes to promote CFLs like Bachat Lamp Yojana (BLY). Although, most of the surveyed households in Maharashtra expressed their willingness to buy LED bulbs in future there will still possibly be a lag before the entire lighting stock is transformed to LED lights. Households in Uttar Pradesh, on the other hand, seem to have leap-frogged from either incandescent bulbs or no-light to LED lights. 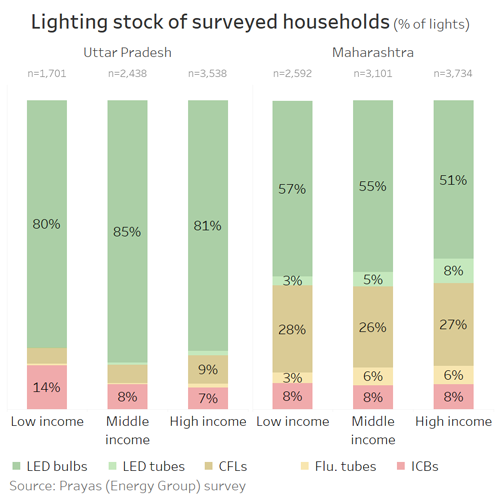 Interestingly, only 12% of the surveyed households in Uttar Pradesh and 17% in Maharashtra reported buying LED bulbs under the UJALA programme. However, the widespread adoption can still be attributed to the programme due to its broader impacts on the lighting industry. Economies of scale enabled by UJALA has drastically reduced the price of LED bulbs sold outside the programme as well. Moreover, the demand for LED bulbs has also spawned a large small-scale industry. There are about 250 registered LED bulbs manufacturing units in India, up from a small number in 2014. Hence, there is an abundance of cheap LED bulbs in markets. However, this has also raised concerns about their quality. Bureau of Indian Standards (BIS) mandates all the LED lights sold in India to conform to certain safety and performance standards. Bureau of Energy Efficiency (BEE) additionally has a mandatory star labelling scheme for LED lamps rating all the LED lights sold in India from 1 star (least efficient) to 5 star (most efficient). However, compliance with these regulations is lax. A recent survey of 400 retailers across 8 cities finds that half of the LED bulb brands available in the market do not conform with the BIS standards for safety and performance. In our survey, only 2-3% of the households in both Uttar Pradesh and Maharashtra knew about the star-labelling program for LED bulbs. Further, majority of the households in both states cited performance as the reason for the purchase of LED bulbs. Only a few households mentioned low price of LED bulbs and reduction in electricity bills due to use of LED bulbs as a reason for their purchase. Hence, it is crucial to ensure the availability of good quality LED bulbs to sustain the on-going market transformation to LED lighting. This will require increased consumer awareness about the star-rating programme for LED bulbs and stricter compliance with the regulations. 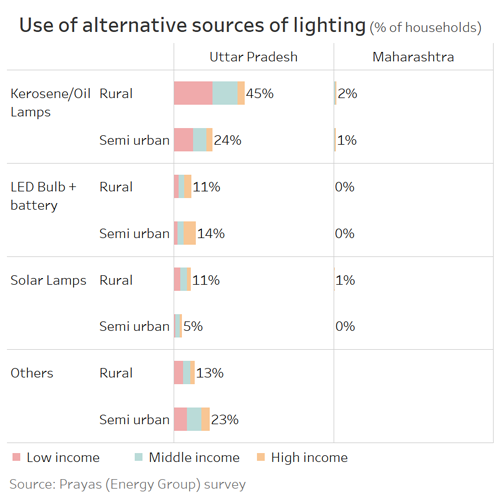 The survey also highlights the impact of electricity supply quality on the household behaviour. About 45% of the rural households in Uttar Pradesh still use kerosene lamps as a backup option for lighting which can cause indoor pollution and accidents (see Figure 1). Ownership of LED bulbs integrated with battery and solar lamps is also in the range of 11-14% in both semi-urban and rural households. These options are more expensive than regular LED bulbs but even low income households seem to opt for it. In Maharashtra on the other hand very few households use alternate lighting options.

To conclude, LED lighting has been widely adopted in the surveyed semi-urban and rural households of both the states across different income categories. Households in Uttar Pradesh seem to have leap-frogged from either no-lights or incandescent bulbs to LED bulbs, while those in Maharashtra are gradually moving from CFLs to LED bulbs. It is crucial for the government and other actors to focus on ensuring the availability of good quality LED bulbs in order to sustain the on-going LED market transformation.

In the next post, we will discuss households’ use of energy for space-conditioning and its role in providing thermal comfort.

This post was translated and published by Eklavya in their Hindi magazine Srot (Vigyan evam technology features). This translation is available here.